An important and often overlooked topic was raised by Corey Hoffstein at NewFound Research. Here are his first couple of tweets on that topic:

Indeed, this is about rebalance timing and how little attention it gets. Within the construct of a systematic strategy, this is a part of the Execution Model.

Courtesy: Inside the Black Box - The Simple Truth about Quantitative Trading by Rishi Narang

Unless it’s an intraday trading model, when it comes to portfolio rebalancing, a common convention is to rebalance at the beginning of a new month. Perhaps, these are some of the reasons behind this convention:

But should this be accepted just on the basis of a common convention? If a monthly rebalancing cycle is adopted, does it matter which day of the month is chosen for rebalance? Are there any major differences between portfolios rebalanced on the first business day of a month, as opposed to other days? Are these differences just completely random in nature?

These are some of the questions that need to be answered.

To answer these questions, I used one of the most basic market timing strategies:

Go long S&P500 when it trades above its 200 days simple moving average (SMA), otherwise exit and invest in T-Bills.

There is nothing magical about using a 200 days SMA. Other periods in the same ballpark work just as well, as shown by Meb Faber in his QTAA paper. I used this simple strategy to illustrate the effect of rebalance timing on portfolio performance.

Here are the results: 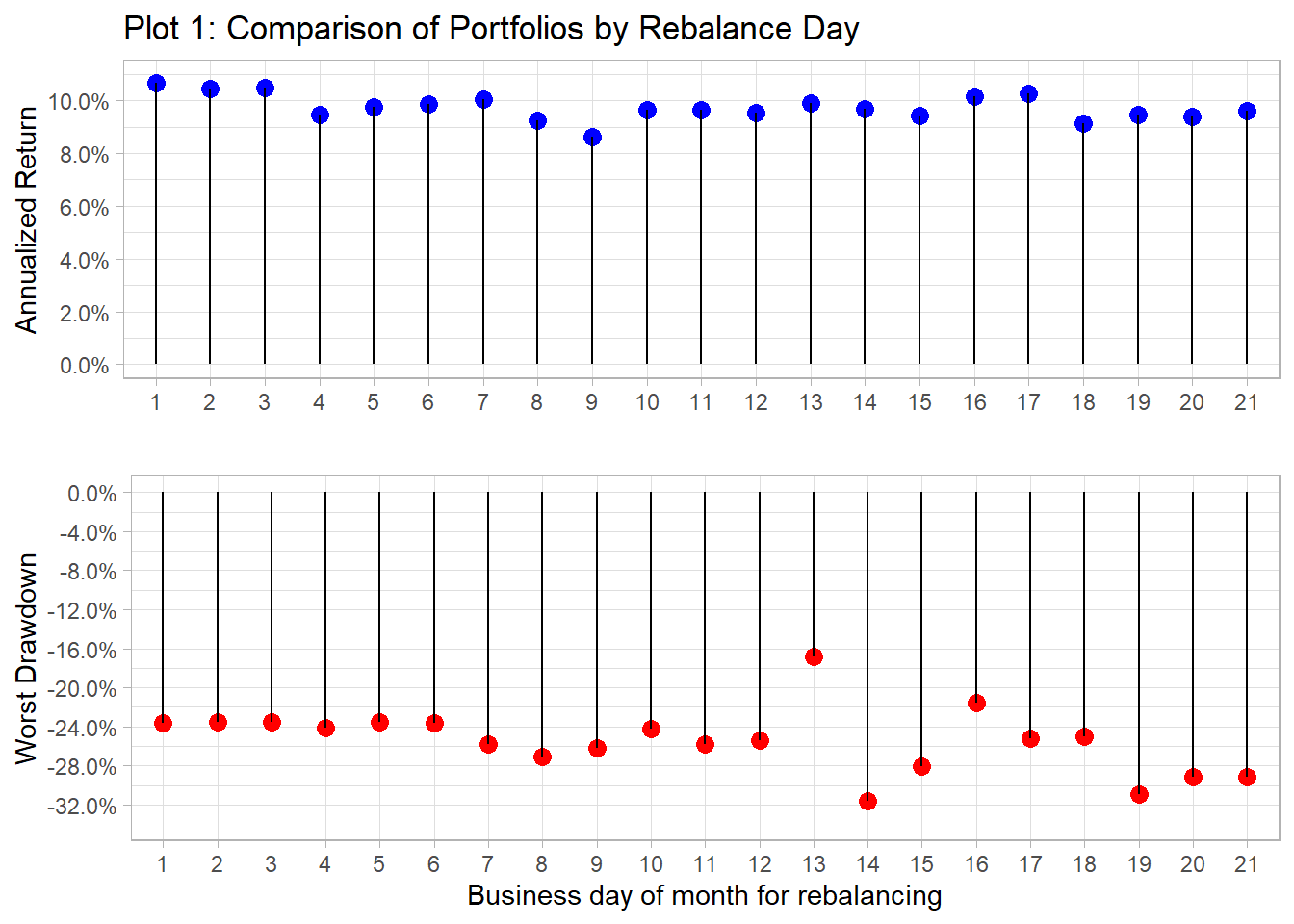 The impact of luck could be observed in drawdowns as well as returns. The worst drawdown of series 13 is just a little more than half of series 14. Nevertheless, their annualized returns are almost the same. In all the cases, except series 13, the worst drawdown happened after the crash of 1987. Ironically, series 13 is the lucky one here ;). As Corey mentioned in his tweets, for an investment manager this is a difference between getting hired and fired.

At the moment, series 1, gives the best return. As we progress to series 9, the returns decrease quite significantly. There is a difference of over 2% in their annualized returns. Here are their performance summaries:

Let’s take a look at how the best (blue) and the worst (red) series have fared relative to the other 19 series in the entire historical period: 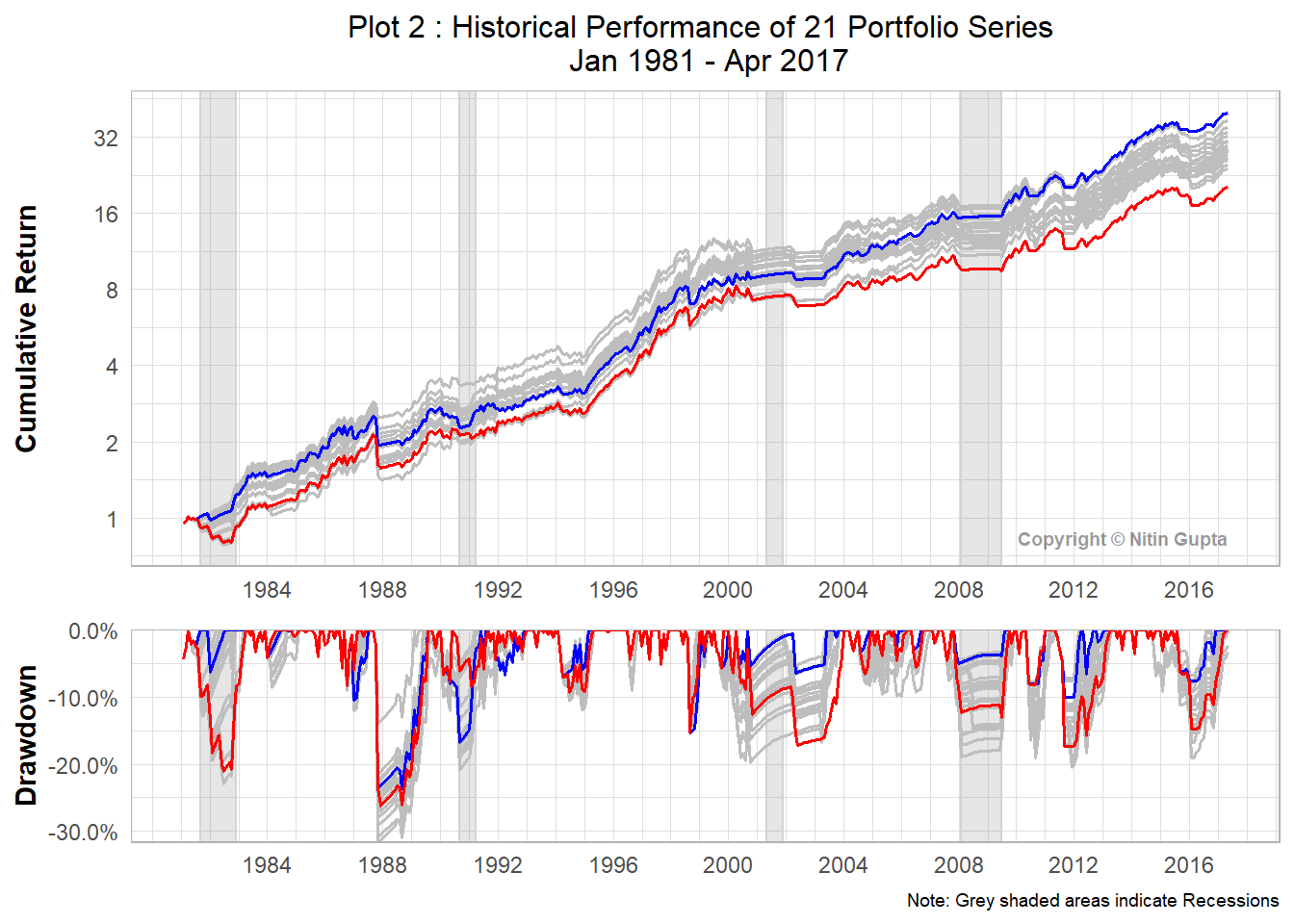 So, turns out the current best performed worse than the median for most of the historical period. But since 2003, it really took off and has managed to avoid many whipsaws that appear to have affected other series. But will it continue to do better? The impact of luck is quite obvious here. Quite surprisingly, the worst series has been at or near the worst throughout the historical period. Perhaps a longer backtest or one with a different investment strategy would be useful to investigate this further.

Mitigating the impact of luck

So how could the impact of luck be mitigated without resorting to more frequent rebalancing, and thus incurring higher portfolio turnover costs?

Here are a couple of ideas:

Let’s see how these methods compare to the best and worst portfolios: 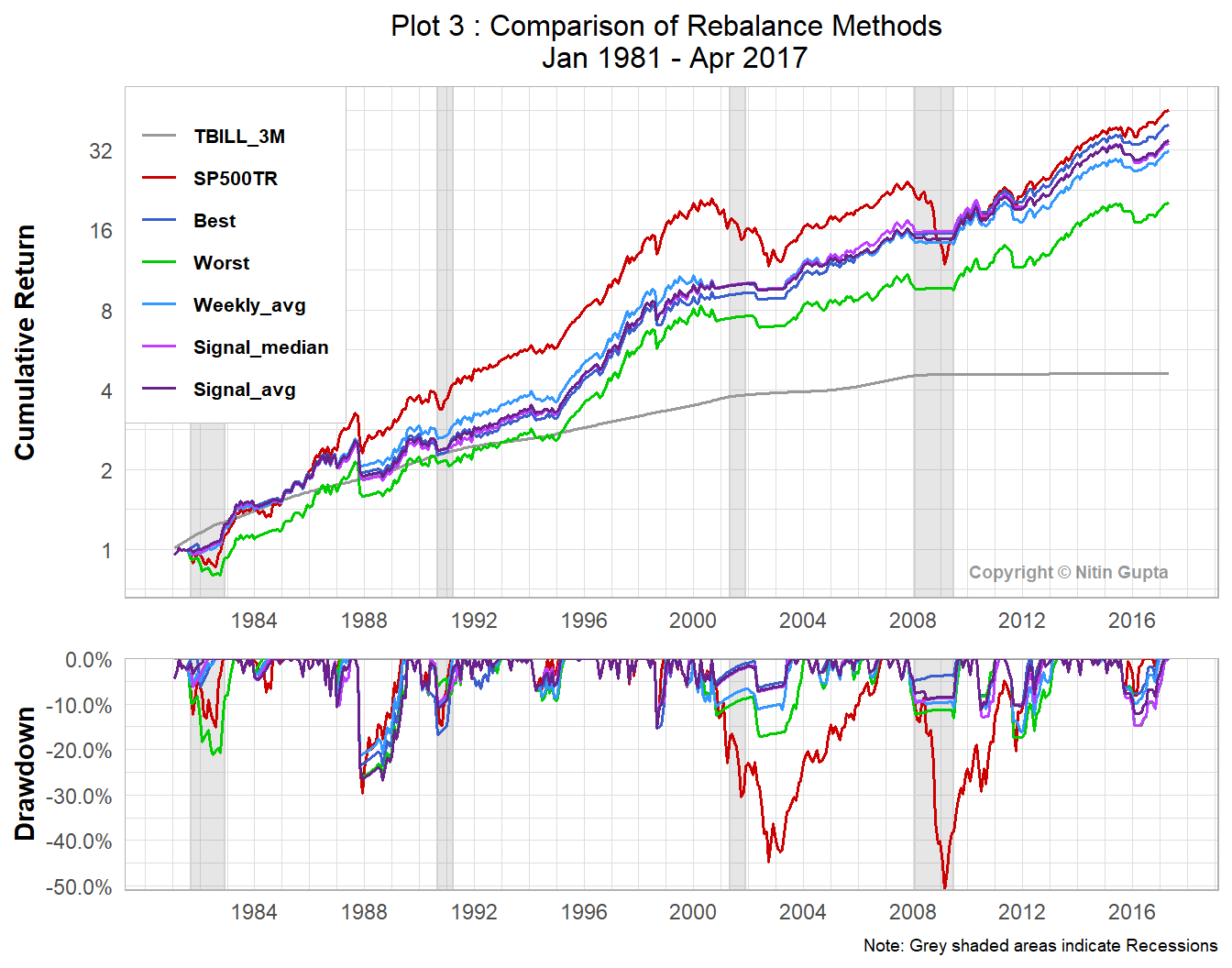 The three methods with overlapping portfolios and signal smoothing are denoted by Weekly_avg, Signal_median, Signal_avg. We can observe that all of these methods have similar performance profiles in the historical period, with minor differences in shorter time periods. They perform much better than the Worst portfolio series, in all time periods. And during most of the historical period, they have even performed better than the current Best series.

As we can see, relatively simple solutions work well to mitigate the impact of luck in rebalance timing.

All content displayed here is for informational purposes only and is not guaranteed to be accurate, complete or up-to-date. Nothing herein should be considered investment advice or recommendation to buy, sell or hold any securities.